Among Us for PC is a fun game full of action and intrigue. Among Us is currently available for PC users using Steam. However, you can also download Among Us on PC with LDPlayer for free. As we know, Among us is free on mobile devices. If you're looking to get the app on a PC for free, you will need an Android emulator like LDPlayer.

LDPLAYER: BEST EMULATOR FOR AMONG US ON PC

LDPlayer is a free Android emulator that uses virtualization technology and allows you to try the Android operating system on your computer. LDPlayer is one of the best and lightest Android emulators for Windows. For playing Among us on PC with no cost, LDPlayer should be your best PC emulator for Among Us.

Download Among Us on PC and Laptop so as to have a voyage through the depths of outer space to live on a space station. It’s a busy life on the space station and the whole crew all have a specific set of tasks and missions to complete in order to end their day. However, among these normal and colorful crew members is an impostor whose mission is to kill the rest of the crew.

Playing Among Us on PC and Laptop with LDPlayer will take you on the role of the crew member or an impostor in PC. Crew members will have to complete defined tasks before they are all murdered. The impostor has the ability to screw up these tasks and sneak through vents to other areas or to remain hidden. Each game can be customized by the player that created the game connection to make it either more interesting, difficult, or easy for one side or the other. Play Among Us on PC with LDPlayer to discover an outer space impostor hell-bent on murder.

RECOMMENDED REQUIREMENTS FOR AMONG US ON PC

The minimum recommended requirements for Among Us on PC include:

FAQs ABOUT AMONG US ON PC

Q: Can I cross-play Among Us?

A: Among Us is a multiplayer game of teamwork and betrayal for 5-10 players. Crew members attempt to get their ship prepared for launch into outer space and also complete their task minigames. Among Us is available now as a beta on PC with online and local multiplayer cross-play.

Q: How can I download Among Us on PC?

A: How to Install Among Us on PC:

2: Ccomplete the installation of LDPlayer

3: Open LDPlayer - Among Us emulator and search Among Us on Play Store

4: Install Among us on your emulator with no cost

5: Once installation completes, click Among Us icon to launch the game on PC

6: Enjoy playing Among Us on your PC with LDPlayer

Q: How do I become a good impostor in Among Us?

A: The best way to ensure victory as an Impostor in Among Us is to make use of the initiative. Don’t let crew members control the game by going around in big groups. Keep on sabotaging different rooms on opposite sides of the ship and divide them as much as possible. When this is feasible, you can go with whoever is alone.

AMONG US ON PC TOP FEATURES

Objective: Kill off the Crew

In this fun game, you can join a team of spaceships on a space journey and discover that a deadly intruder/enemy has come aboard to destroy the entire crew. All actions and intrigues take place in a spaceship which has several units. You can start a new game online or against the computer and can take on the role of a crew member or cheater who remains anonymous to other players. If you choose the cheater role, your goal would be to kill any crew member that sneaks up on you and hit the kill button. However, if you are part of the crew members, you will need to dodge the cheater and find out who you are before it is too late.

A chat room has been provided which will allow viewing of all players after the entire campaign. The display will help provide information during the game so as to have a discussion about who the cheaters suspect and can hold a vote. Also, during the game, players can interact with some objects in the ship’s rooms.

You can play Among Us online or over local WiFi with 4-10 players while everyone tries to get their spaceship ready for departure. However, be aware that out of the 4-10 players, there would be an impostor among, hence the name - Among Us. The impostor will try to kill the crew members.

The impostor can make use of sabotage to cause chaos, which makes up for easier kills and better alibis. Crew members can win by completing all tasks or by discovering and voting the impostor off the ship. 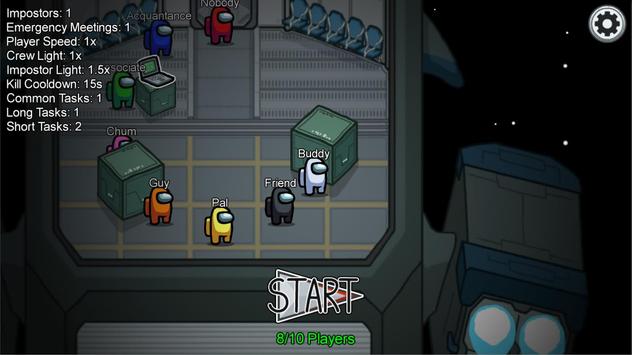 تنزيل  Among Us  على PC